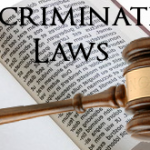 All 50 states have laws prohibiting discrimination, with discrimination defined as an action that denies social participation or human rights to specific categories of people based on prejudice.  Title VII of the Civil Rights Act of 1964 makes it illegal to discriminate against or harass someone on the basis of a protected characteristic.

Contact LegalHelpLawyers.com today to get in touch with an experienced discrimination attorney!