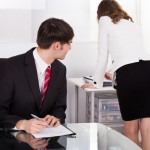 Harassment can be against a woman or a man and the victim is not always of the opposite sex. It can also be considered harassment if the person is not the intended victim but is affected in any way by the offensive conduct. The conduct must be unwelcome to be considered harassment. The unwelcome conduct must also create an intimidating, offensive, abusive or hostile work environment, either for the victim who is the target of the unwelcome conduct or employees who witness it.

However, to be the illegal form of workplace harassment, it must be based on race, color, religion, national origin, disability, genetics, age or sex. Sex discrimination includes harassment based on gender, pregnancy or childbirth, and in several states and Federal employment, on the basis of sexual orientation (sexual preference), marital status or parental status. Disability discrimination includes harassment for having AIDS (acquired immune deficiency syndrome).

Harassment can come from anyone in the workplace, including a boss, coworker, and even a non-employee (e.g., independent contractor or client). No one is immune from violating the laws.

“Offensive conduct may include, but is not limited to, offensive jokes, slurs, epithets or name calling, physical assaults or threats, intimidation, ridicule or mockery, insults or put-downs, offensive objects or pictures, and interference with work performance.”

The EEOC indicates that the offensive conduct must be pervasive or serious enough that a reasonable employee would consider it to be intimidating, hostile or abusive. Petty slights or annoyances aren’t likely to constitute legally actionable workplace harassment at work according to the EEOC.

If you feel that you are being harassed at work, a consultation with a qualified employment law attorney can give you the information you need to either attempt to resolve the problem with your employer or to make a harassment claim.

If you notify the harasser to stop the conduct and it is not stopped, you should submit an employer complaint about the harassment, or any other policy method that is available. The EEOC investigates allegations of sexual harassment.

The EEOC will review the entire record of the alleged harassment, including the circumstances surrounding the offensive conduct. Harassment is often about power, control, and intimidation. In a 1993 Supreme Court Decision, it was determined that a plaintiff alleging sexual harassment does not need to demonstrate concrete psychological harm, but only needs to show sufficient evidence of a hostile or abusive working environment.

As with discrimination charges of any type, employers are prohibited from retaliating against employees who report harassment directly to the EEOC (or state equivalent) or through their attorneys, or who participate in related proceedings in any way.

Who is Liable for Workplace Harassment?

In 1999, the Supreme Court ruled that employers are “vicariously liable” for harassment by supervisors. This means that the employer is responsible for the behavior of its supervisors, even if it was not aware of the behavior. It was also noted, however, that if the harassment did not result in a tangible job action, the employer could raise the defense that it exercised “reasonable care” to prevent and correct the harassment and the employee unreasonably failed to use its complaint procedure.

Should I Hire an Employment Law Attorney?

It is always advisable to contact a harassment attorney to ensure that you are aware of your legal rights and options.  Even if your harassment complaints appear to be investigated by your employer, it is best to make sure procedures and policies are being followed.  It is important for harassment victims to realize they have nothing to be ashamed or embarrassed about.  Support groups and counselors exist for harassment victims.

Because the EEOC is swamped with discrimination charges annually (e.g. 30,641 harassment charges alone in TY 2009), it typically takes on only the most legally-compelling cases.  As a result, it may be preferable to file a harassment charge through an attorney rather than directly with the EEOC.  An experienced attorney will be able to state your case in a more legally compelling manner, which can improve your chances of success with the EEOC.

The Process of Filing a Discrimination Charge

You must first file a discrimination charge with the EEOC (or state equivalent), to preserve your right to later file a private harassment lawsuit.

If the EEOC (or state equivalent) does not act on a charge, then filing a private harassment lawsuit is likely to be the only avenue for seeking legal relief. Attorneys often take serious, winnable discrimination cases on a contingency basis, and also often win better awards than does the EEOC.

If your harasser has threatened to harm you, or if you reasonably believe that his or her behavior has significantly jeopardized your safety, security or privacy, then you may be entitled to file a restraining order against him or her.

Contact LegalHelpLawyers.com today to consult an experienced employment law attorney in your state for legal advice!