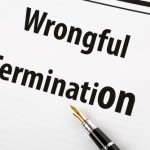 Some of these violations carry statutory penalties, while others the employer to pay damages based on the terminated employee’s lost wages and other expenses. Certain wrongful termination cases may result in the payment of punitive damages to the terminated employee, while other cases may carry the prospect of holding more than one wrongdoer responsible for damages. An employment law attorney review the facts of your particular case, and can give you expert advice on whether or not you may have a valid wrongful termination claim.

Although an at-will employee may have a cause of action against an employer who fires her in violation of state or federal law (i.e. anti-discrimination laws, whistleblower protection laws), the employee usually has no legal recourse for being fired, even if the firing was unfair or unwarranted. Because of this harsh result, many states have begun to chip away at the at-will doctrine, providing limited causes of action for wrongful termination, even where the firing did not violate a specific state or federal law. These actions, though they do not do away with at-will employment, allow employees to recover damages against employers who act in particularly egregious ways. This is a complex area of employment law, and only an experienced attorney will be able to advise you whether you have an actionable case.

There are two main theories under which at-will employees sometimes recover in wrongful termination actions: violation of public policy and breach of implied good faith and fair dealing.

Although an employee who is discharged because of his or her race, sex, religion, national origin, or disability, for example, will have a remedy against an employer under state and federal statute, some violations of public policy are not clearly spelled out by statute.

In cases where an employer clearly violates an important public policy in firing an employee, most states will allow the employee to recover against the employer in a wrongful termination action. In such cases, punitive damages, in addition to back pay or front pay, may be awarded.

Examples of public policy violations that often result in recoveries by terminated employees include:

Breach of Implied Covenant of Good Faith and Fair Dealing

Sales employees have been most successful in these actions, often prevailing against employers after showing that they were fired because the employers wanted to avoid paying commissions to them. Similarly, employers who fire employees so that they do not have to pay end-of-year bonuses may also face such a claim. In these cases, the employees are usually entitled to recover the unpaid commissions or bonuses. They are not, however, usually entitled to punitive or other damages.

Wrongful dismissal will tend to arise first as a claim by the terminated employee. Many jurisdictions provide tribunals or courts which will hear actions for wrongful dismissal. A proven wrongful dismissal will tend to lead to two main remedies: reinstatement of the dismissed employee, and/or monetary compensation for the wrongfully dismissed. A related situation is constructive dismissal, in which an employee feels no choice but to resign from employment for reasons imposed by the employer. If you believe you have been wrongfully terminated from your job, contact an employment attorney now to discuss your legal options.