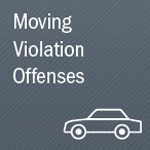 A moving violation is any violation of the law committed by the driver of a vehicle while it is in motion. The term “moving” distinguishes it from other, non-moving, violations such as parking violations, equipment violations, and paperwork violations (relating to insurance, registration, inspection, etc.)

Moving violations are usually classified as infractions or misdemeanors, but more serious moving violations (hit and run, Driving Under the Influence, road rage, aggressive driving) can be considered felonies. Moving violation citations typically require payment of fines, possible points added to your driving record (if state-applicable), re-education, increased auto insurance premiums, and/or retaking of driving tests. Each state has different traffic violation laws and depending on your state’s laws you can be at risk of fines, arrest, a revoked license, imprisonment, and other penalties if you are found guilty.

Moving violations can affect the status of your license, increase the cost of your car insurance, and more. Fines for moving violations can vary widely between jurisdictions for the same behavior, usually falling between $25 and $1,000 per moving violation. In most places, moving violations involve fines which must be paid as well as punitive points (depending on the state). As a driver accumulates points, he or she may be required to attend defensive driving lessons, retake his or her driving test, pay additional taxes, or even surrender his or her license. Additionally, drivers with more points on their driving record often must pay more for car insurance than drivers with few or zero points. Most serious moving violations, such as Driving Under the Influence (DUI) and reckless driving, may result in arrest.

If you have been cited for a moving violation, a qualified attorney can often succeed in reducing the severity of the offense and/or reducing the fine or punishment meted out by the court. If you believe you have been cited in error, or if there are circumstances that may influence the outcome of your case, an experienced traffic attorney can advise you how best to proceed.