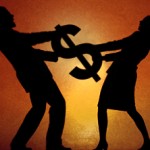 Common practise between divorcing couples is to divide their property and debts amongst themselves sometimes with or without a mediator rather than leaving it entirely to the courts. But in case where decisions cannot be reached amongst spouses, they can submit their property dispute in the court, which divides property according to the state laws.

The division of marital property essentially depends on which state you are living in that is a community property state or an equitable property state. In the former scenario are included states like Alaska, California, Arizona, Louisiana, Idaho, New Mexico, Nevada, Texas, Washington, Wisconsin and Puerto Rico which categorise all property of a married individual as community property or property that is equally owned by both the spouses. Thus this property is equally divided between both of the spouse. While on the other hand are states where the principle of equitable property distribution is followed and thus the assets and earnings accumulated during marriage are divided fairly but not necessarily equally. The court may also award each spouse a percentage of total value of property that is each person will get personal assets and debt whose worth adds up to his percentage.

When it comes to dealing with marital debt it is important to make decisions regarding who is responsible for which debt, during settlement negotiations. Best thing is paying off all debt before filing for divorce allows for a financially clean break and doesn’t keep you worrying whether your ex is making loan payments that still have your name.

In a community property state, you are going to be accountable for debts acquired during the marriage despite your name being on them or otherwise. The best example is home mortgage where both the spouses are going to be responsible. While on the other is an equitable distribution state, where you are only accountable for debts with your name on them. So when buying property make sure you both should be responsible for it. If you haven’t cleared all your debts before beginning of divorce proceedings then the court will divide the debt during the process by determining who incurred the debt and also benefitted most from this. Usually only joint marital debt will be divided by the court in which both spouses benefitted from such as home, car or any other debt incurred for establishment of marital property.